See end of this page to read about trigger arrays

What is a line scan camera ? 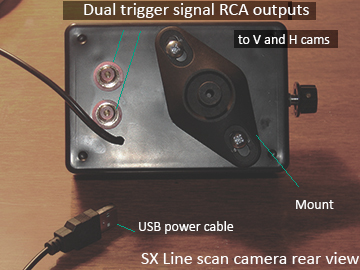 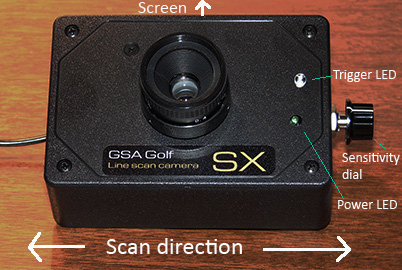 Connect RCA cables to the H and V cams. 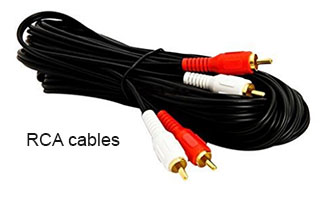 Power to the SX camera is either via a supplied USB power supply or a USB cable connection to the PC (note: this USB connection on the SX is only used for power, no data is being transmitted) 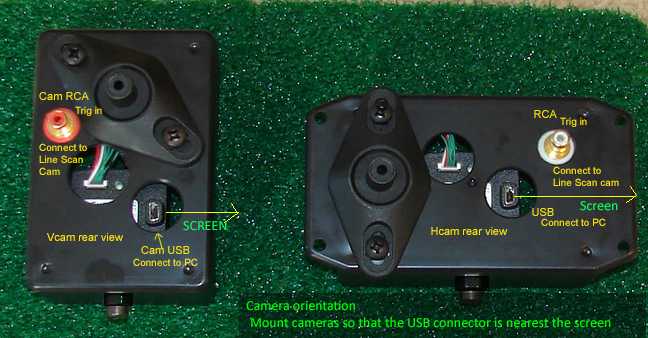 The V and H cam cameras are triggered from the SX line scan camera.

On the back of the SX camera (or on the side if using a multiple-channel SX camera) - you will see two RCA connectors.

Using the supplied RCA cables, connect the short one from the SX cam to the Hcam RCA connector and the long RCA cable

Ensure that cameras are mounted at least 5 or 6 feet from the screen!

Mounting height should not be greater than 9ft. 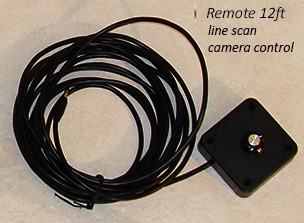 The SX line scan camera's sensitivity control is attached to the SX with a 12ft long cable.

Run the cable from the SX cam along the ceiling and a quarter-way down one of the side walls for easy access.

When adjusting the SX cam's sensitivity, it is important that you not stand under or too near the camera

as then your body will reflect light back into the camera.

Please note that the sensitivity control for the SX line scan camera is a 10 turn potentiometer !

i.e. you have to turn the dial 10 turns from one end to the other end. 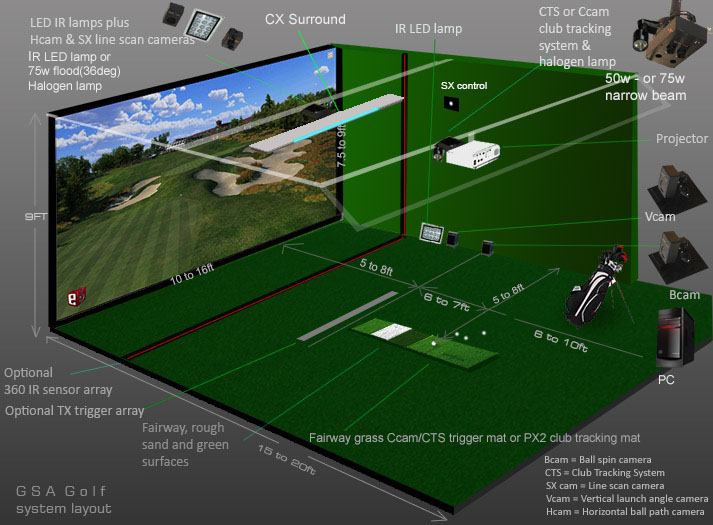 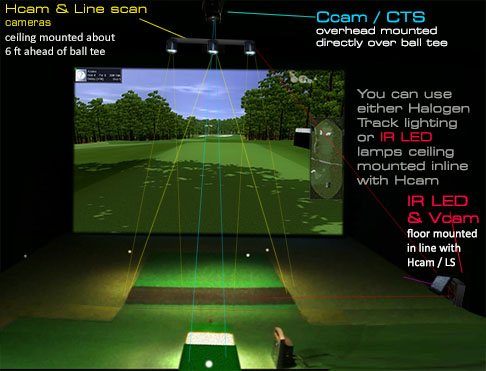 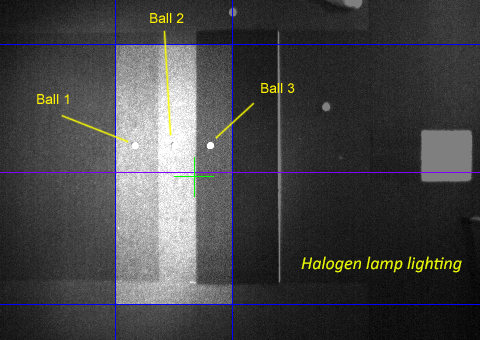 The above image - taken from the overhead mounted horizontal camera (Hcam) - shows 3 types of synthetic grass surfaces with varying degrees of reflectivity.

For both the Hcam and the SX line scan camera to function correctly the surface has to be non-reflective. As you can see, balls 1 and 2 in the image are very difficult to make out

due the surface reflecting too much light from the overhead lamp whereas ball 3 is clearly defined with plenty of contrast.

The line scan camera scans diagonally - left to right - in the enclosure and compares the light reflected back into the camera's image sensor with a user set reflected light level of a golf ball.

It is thus essential that there is enough contrast between the ball and the surrounding surface.

If the surface is reflective - as with ball 1 and 2 - the line scan camera's sensitivity cannot be set high enough as the underlying surface reflects nearly as much light as the ball itself.

A lot of synthetic grass surfaces on the market today reflect too much light for the cameras to function well and have to be treated to reduce the reflectivity.

One simple way to achieve this is to mask off the area directly under both the Hcam and SX line scan camera and spray with a black matt water based paint.

The grass will still appear green but will be a shade or two darker and non reflective. The area to be treated should be around 2 feet wide and 4 or 5 foot long.

with your current turf flooring, use the above mentioned carpet and place this carpet on the floor directly under the LS camera. 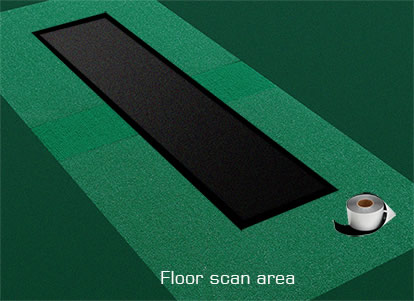 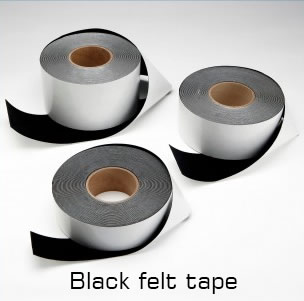 The flooring area directly under the line scan, IR lamp and Hcam cameras must be dark and non reflective.

If using the black non reflective carpet from home-depot you can use black felt tape on the edges to smooth the transition from your floor carpet to the black carpet.

Well ... not exactly super non-reflective but this new "less reflective" turf carpet works really well. i.e. rolling balls / putting are picked by the line scan camera which means all other shots will do too.

This turf padded carpet is only available in 12 ft widths and is pretty heavy so we won't be supplying it as standard with basic camera systems - i.e. the black real non-reflective carpet will be supplied -

but will be available as an optional extra and will be supplied as standard with all new full scale F series systems at the new F series prices. 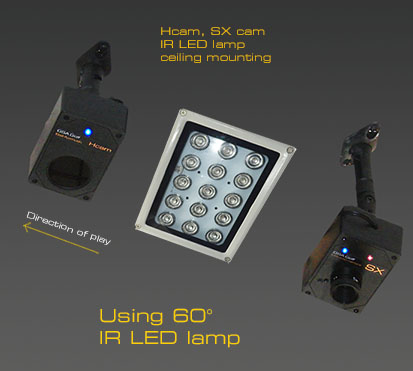 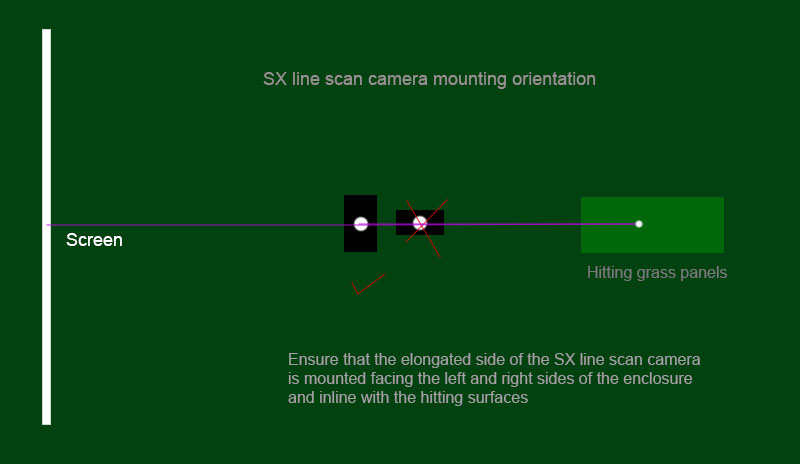 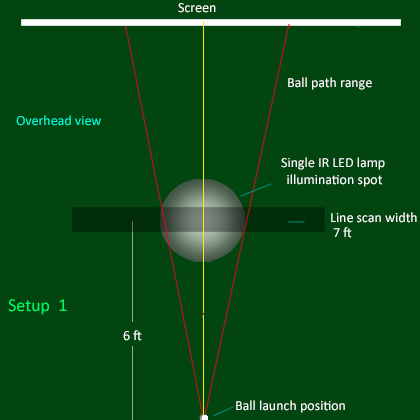 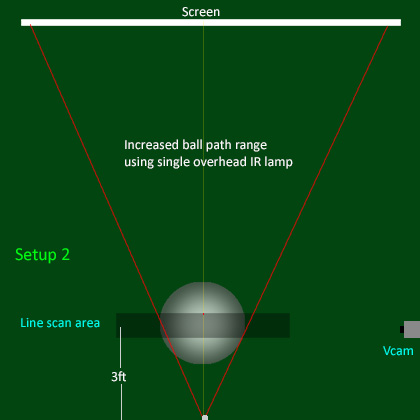 In the above images, Setup 1 is probably the standard setup for most users.

The problem is that the ball path detection range (direction left and right) is quite limited so if balls are hit to the far left or right side of the screen, they won't be detected.

The problem is not so much the line scan camera's FOV - which has a 7 foot plus scan width at ground level - but the overhead lighting which doesn't produce a wide enough beam angle.

In Setup 2, the cameras and lighting have been moved further back towards the launch position and this increases the ball path range nicely.

The only problem is that the ball cannot be played so far ahead as before. i.e. when playing from rough and sand grass panels that are positioned ahead of the normal fairway grass tee position.

In Setup 3, the range is increased by adding more IR LED lamps so that the ball is still detected by the line scan camera when being hit far left and far right.

Recommended IR LED lamps for use with the SX Line Scan camera.

Go here to purchase if you don't already have them 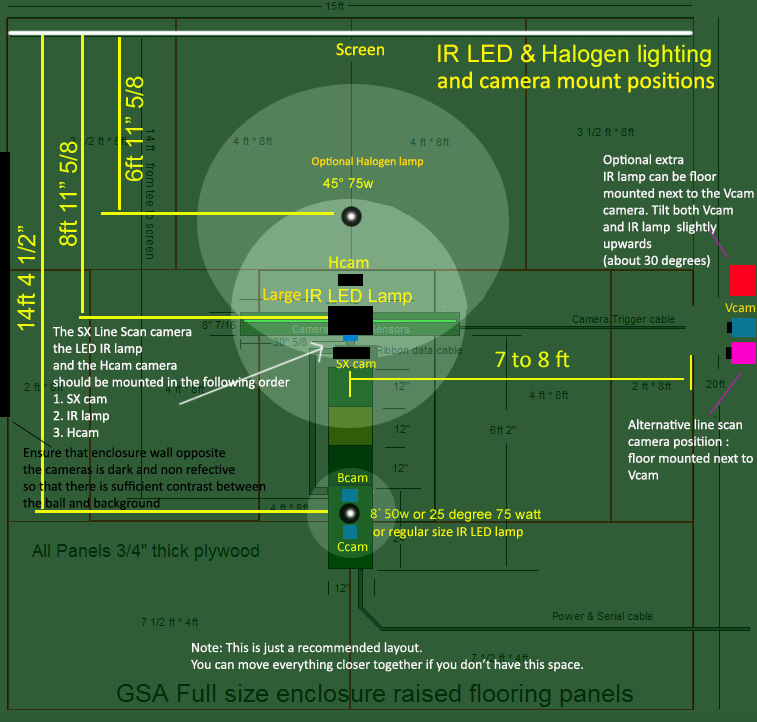 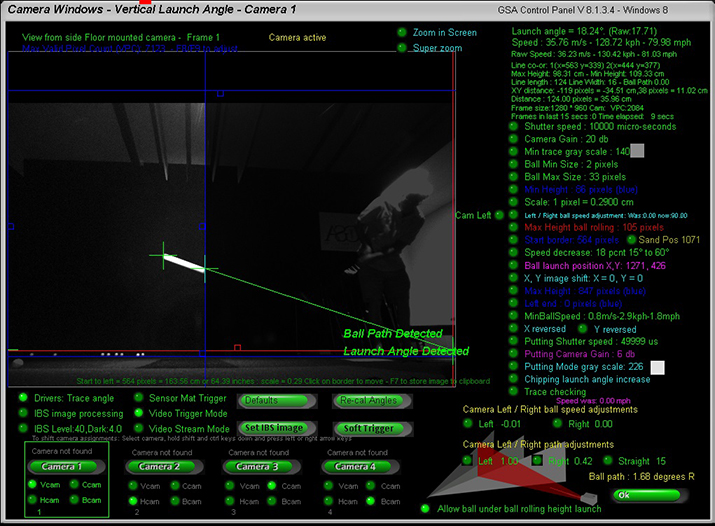 6. Ensure that the mounting height of the LS camera is not greater than 9 ft 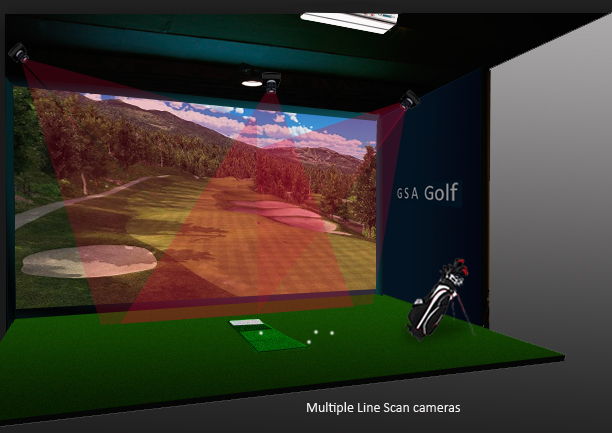 Note: all CX and PX5 systems come with an SX line scan camera 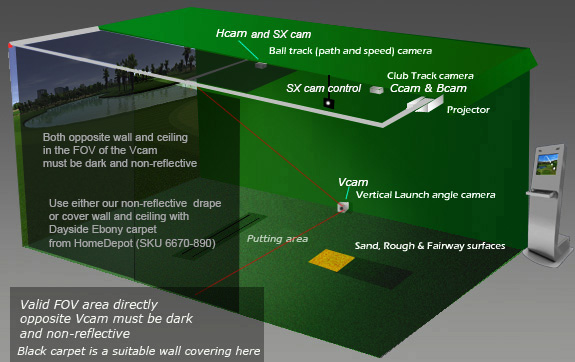 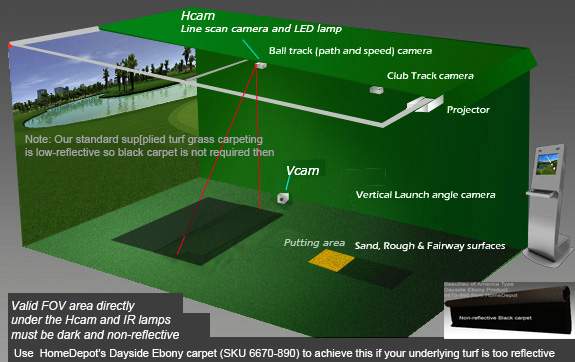 Important ! Note that camera systems require that two areas within the enclosure be dark and non-reflective

and that there should not be too much ambient light getting into the enclosure. ie daylight windows near the enclosure and / or other electric lights

There's been a number of reports that the SX line scan sensitivity has to be re-set from time to time.

I was suspecting that the cause was reference voltage drift but tests showed no more than 2 milli-volt drift in over 8 hours.

Other causes could be varying ambient light conditions or debris or balls lying on the carpet under the line scan camera.

As an alternative to our line scan camera triggers,

The unit is 5ft in length and features 48 sensors that detect any ball passing over them. 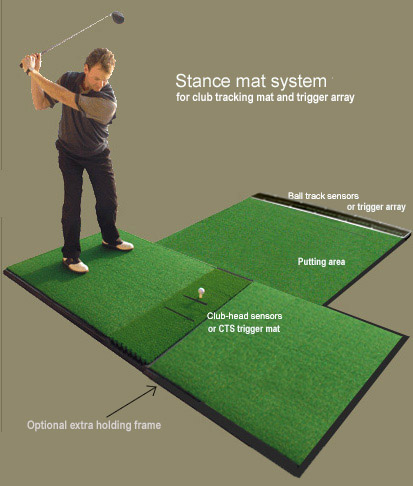 Set of all 3 stance mats

The trigger array is floor mounted approximately halfway between the player's hitting position and the screen.

As with the SX line scan camera, an IR lamp (supplied) is mounted directly over the array at a height of 9ft

In contrast to the SX line scan camera though, the TX trigger array does not require any sensitivity setup.

The Hcam setup does require some small mods though.

Putting with the TX trigger array

In order to putt, either the trigger array has to embeded into raised flooring

or a 1 1/14 inch thick stance mat should be used to raise the flooring between hitting mat and the array to the height of the trigger array (1 1/4").

Note that in order to be able to putt a ball when using a trigger array the flooring has to be raised to the height of the trigger array (i.e. 1 1/4") so that the ball rolls over array.

Click the Turf Grass Flooring button to read more about flooring and how to raise flooring.

The TX trigger array requires an IR LED or Halogen lamp to be ON and pointing directly down over the array.

The light emitting from the overhead lighting must be getting down onto all of the sensors in the array. 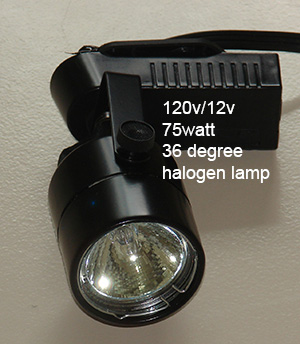 The trigger array works best with a single halogen lamp

Getting the TX trigger array to work

In order for the TX trigger array to function correctly the overhead IR lamp must be ON and pointing directly down over the array.

then the green LED light will be ON.

This green LED light will also be ON if the overhead lamp is mounted too high above the array.

Combining both the SX line scan camera and the trigger array

When using a trigger array instead of a line-scan camera for the H and V cams, an Hcam trigger delay has to be set to prevent the

trigger array casing from being captured within the image of the H cam.

As ball speeds for putting and chipping are far slower for regular shots, the trigger delay has to be greater for these putts and chip shots.

Thus there are now separate Trigger delay settings for putting and chipping.

To set in the Hcam window:

Press the P key to go into putting mode and set the trigger delay to around 80 Milli-seconds.

Press the C key to go to Chipping mode and set the trigger delay to around 20 Milli-seconds.

In normal shot mode, set the Hcam trigger array to around 4 Milli-seconds.

The addition of this new line scan camera placed halfway between the Hcam and hitting area will prevent this.

The "Line Scan Shot Detector" is used as a trigger gate that only allows the main line scan camera's trigger signal to pass through to the ball V and H cameras if an object passes through its FOV.

It can also be used to detect if someone is standing at or close to the hitting position and thus blocks the main trigger signal if no one is at the hitting mat. 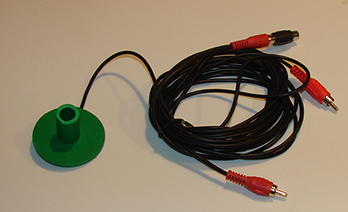 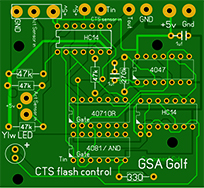 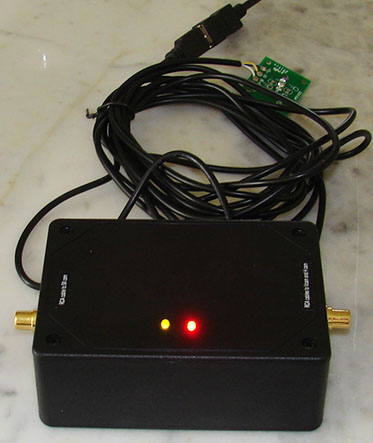 A lower cost alternative to the line scan camera shot detection, is to use an optical sensor shot detector. This sensor is emedded in the hitting mat just in front of the ball launch position.

Up to 3 sensors can be used: one in the hitting mat for regular shots, one on green surface for putting and one for the rough or sand shots.