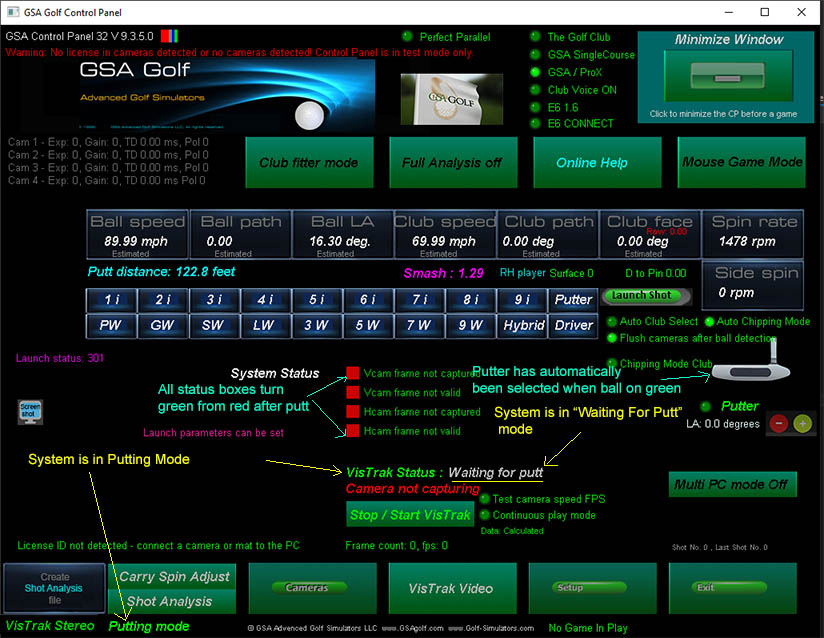 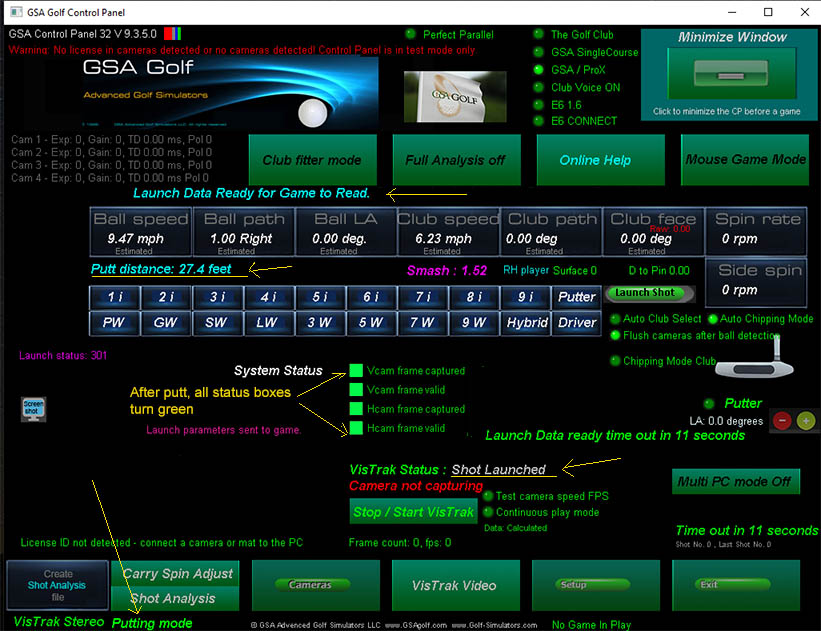 CX putting with just the Hcam 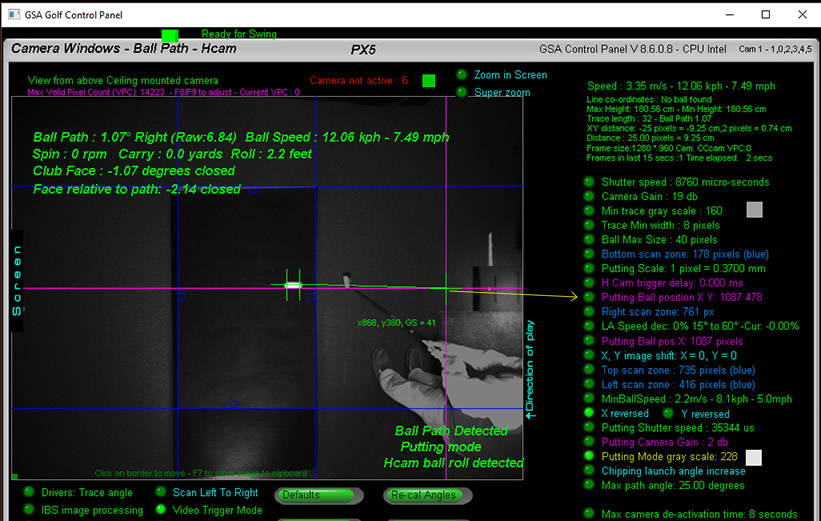 Setting up putting on the CX systems is sometimes a bit intricate so this new feature will allow putting using just the overhead Hcam camera and greatly simplify the setup.

The method is quite simple: If no vertical launch is detected but ball path detected then it will be assumed that the ball rolled and the path and speed will be calculated from the Hcam.

The normal setup procedure for putting is to set the two red and blue lines so that a ball rolling is only seen by the Vcam camera within these boundaries.

Depending on lighting conditions, this can sometimes be a bit difficult to setup.

The alternative Hcam method is to set both red and blue lines to be just above a rolling ball so that the Vcam doesn't detect it. 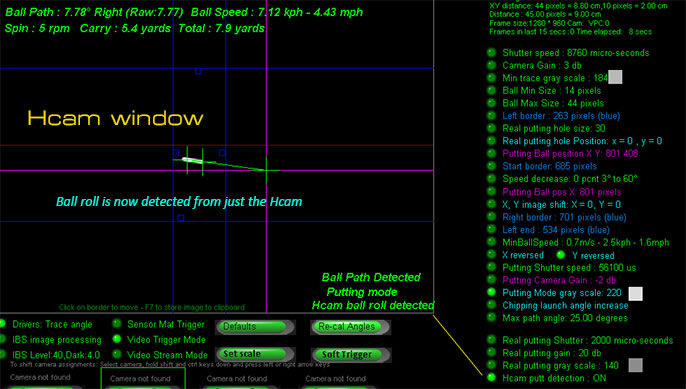 Then, in the Hcam window, switch on the "Hcam putt detection".

When this is done, a rolling ball will still trigger both the V and Hcams but the Vcam won't detect the ball.

The system will know that a new frame in the Vcam was captured but no ball was visible.

The Hcam, however, will detect the both ball path and ball trace - that equates to the speed of the ball - and will thus assume the ball rolled and send this data to the game software.

To setup, place a ball on the place where you will normally be putting from - usually a foot or so in front of the hitting mats -

and mark this area. Grab a new frame in the Hcam window using the "soft trigger" button to get a new image containing the ball.

Then use the new Putting Ball Position XY adjustments to set the putting ball position (shown here in turquoise).

As putt detection with the Hcam is now the preferred method, the putting scaling factors in the Vcam and Hcams are now synchronized.

Before, there was some confusion as to which putting scale factor to use.

When adjusting putting ball roll distance, the estimated roll distance in feet is now displayed in the Hcam window. 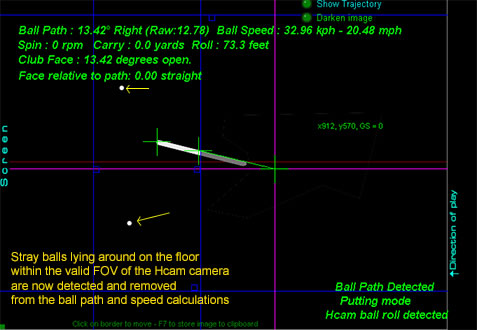 Stray balls lying around on the floor in the Hcam's FOV are now detected and won't effect the ball path and speed calculations. 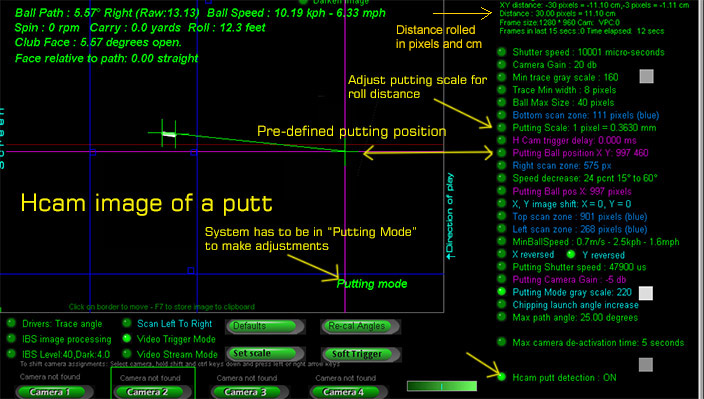 In order to make adjustments, the CP (Control Panel) has to be in "Putting mode"

Press the P key on your keyboard to do this.

Ensure that the putting ball position has been set

You will normally be putting from a position about a foot or so in front of the last grass fiber mat in your system so that the ball rolls on a flatter surface and not over taller grass fibers.

To set the putting position, place a ball where you will normally be putting from and soft trigger the Hcam camera to grab a new image so that you can see the ball.

Then select the "Putting ball position" and move the cross hairs to where the ball is.

Use the "Putting Scale" to adjust roll distance

Make a putt and note the distance the real ball has rolled. Using the "Putting Scale", adjust so that the Roll is near the real distance.

Note that roll distance in the game software will vary depending on the green slope.

The default scaling factors for a specific Hcam mounting height are:

which will be somewhat less than the initial speed of the ball as it leaves the putter club face.

i.e. the ball will be decelerating over time and if the cameras are 3 feet or so away from the putting position,

the ball will have decreased in speed by a factor of 10 to 30 percent by the time it is measured.

We therefore recommend adding 10 to 30 percent to these factors to compensate.

In order that the system measures the correct ball speed of a putt, the scaling factor has to be correctly set.

In order to do this, place a 1 foot (30cm) or so length of white paper strip on the floor directly under the Hcam. Make the paper strip about 2 inches or 5cm wide.

This strip will simulate the trace of the ball putt roll in the Hcam.

Switch the system to Putting Mode by pressing the "P" key.

(Note: Do not run any game software while doing this. i.e. E6 or TGC or GSA)

Go to the Hcam window and click the "Soft Trigger" button to capture a new image. The system should then have detected a putt.

Click the "Putting Scale" radio button and - using the up/down arrow keys - adjust the putting scale factor so that the measured " Distance rolled" is equal to the length of the white paper strip.

The system can now measure the exact speed of the putt using this distance and the Shutter / Exposure time of the camera. i.e. speed = distance / time.

For Hcam putting to function, the Vcam should not see or detect a ball when it rolls on the ground

Thusly, ensure that the "Bottom scan zone" and "Max height ball rolling" borders are above the ground level and that a ball rolling is only visible below these two lines.

When using regular grass turf flooring, the contrast between the ball trace and the underlying grass turf carpeting will not be so great.

In this above image the putt is not correctly detected 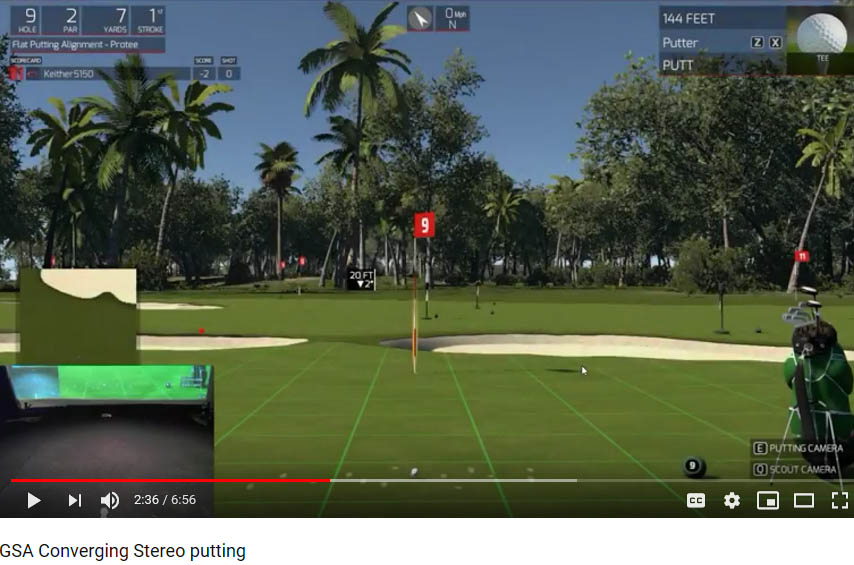 The above video is from customer Keith showing putting using the new converging stereo setup.

Roll distance shown when putting in the CP 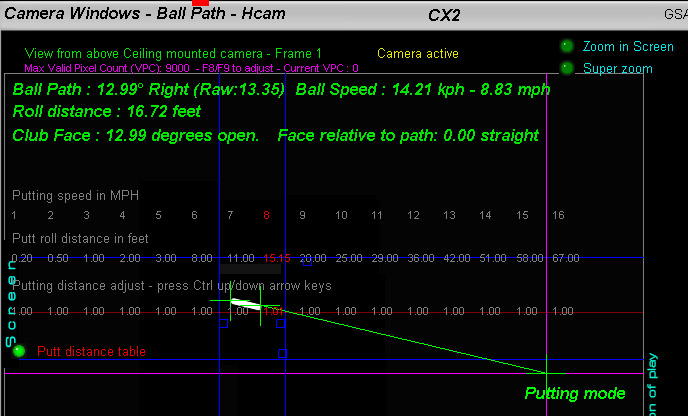 Note that setting this roll distance for a particular ball speed in the CP has no effect on the distance the ball will roll on the green in the game software.

The CP has no direct influence on the ball roll distance in the game software other than it's ball speed and direction left or right.

The game software then calculates the roll curve and roll distance based on the current green speed and green slopes.

In order to adjust the ball roll distance in the game software, you have to adjust the putting scaling factor in the Hcam window when in "Putting mode".

The current table entry - based on the putt ball speed - is shown in red text.

In order to change the entry you can either putt longer or shorter putts or move the blue scan lines closer and over the trace to reduce the measured trace length.

As with putting, chipping on a golf simulator can also be a bit challenging so we've added three adjust factors to help improve things

Chipping mode automatically kicks in when the ball is within the User Defined chipping mode distance from the pin but not on the green.

For tests purposes you can manually set to "Chipping Mode" by pressing the "C" key on your keyboard.

Note that switching the "Chipping Mode" on or off with the "C" key is only possible if a game is not in play.

The above screen shot shows that the measured ball speed of the chip has been reduced by 65% and that the chip distance has been set to 54 yards.

When a game is running, the current ball distance from the pin is shown 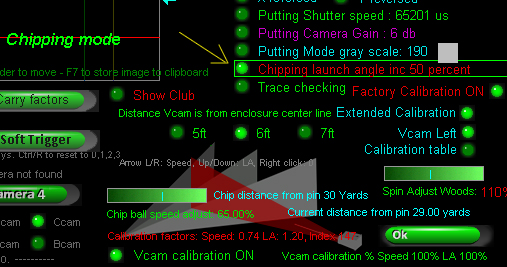 The system calculates spin rate from ball launch angle and speed when not using our ball spin cameras but this can be too low when chipping.

In order to prevent the ball from rolling off the green when it has landed after a chip, a relatively high minimum spin rate should be set. 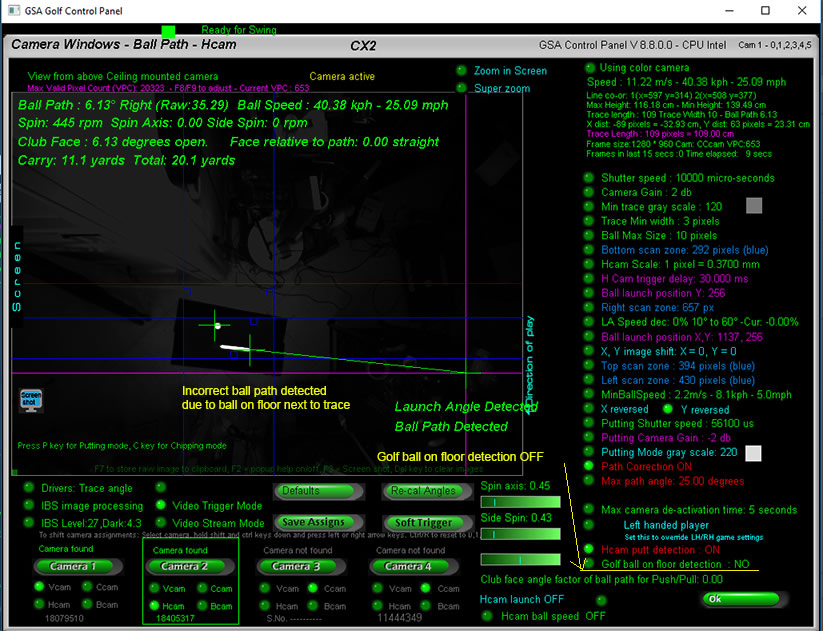 Balls that bounce back from the screen and lay around on the floor in the FOV of the Hcam can cause problems with the ball path detection of the Hcam. 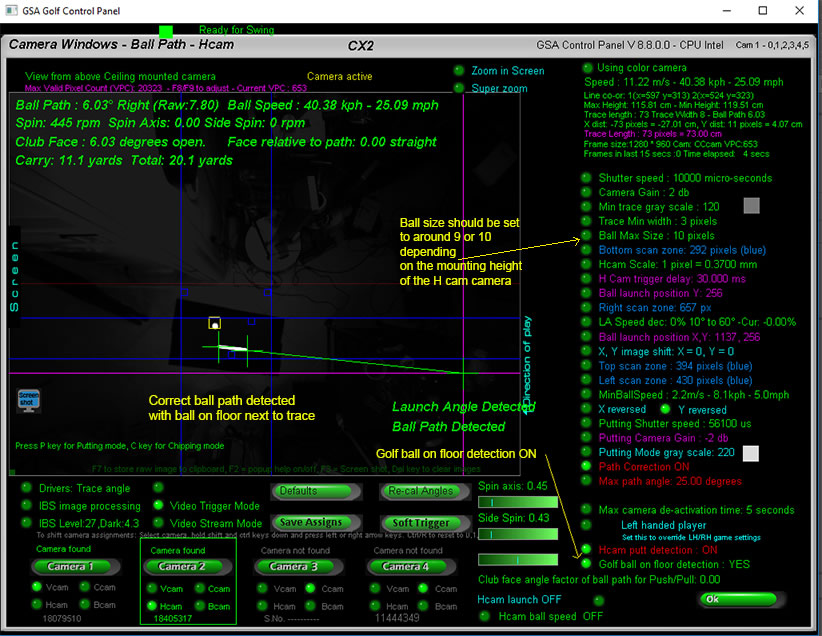 This version of the CP now automatically detects such balls and declares them as invalid areas so that the correct ball path can be measured.

As this is a new feature, this option can be switched on or off.