Note that all reviews are independent customer reviews 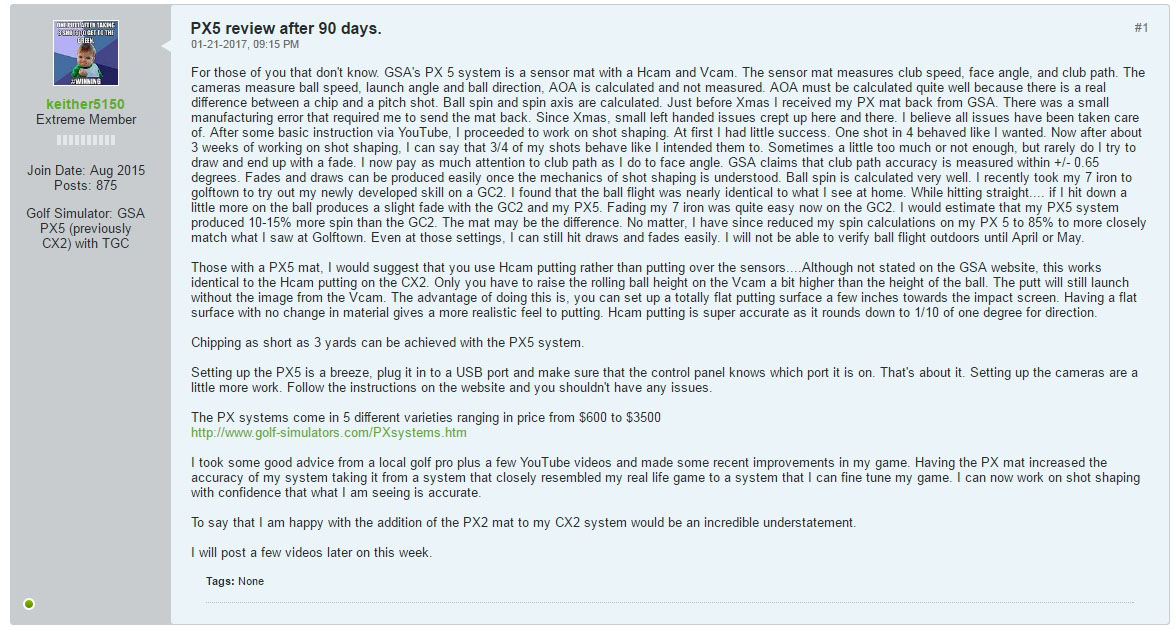 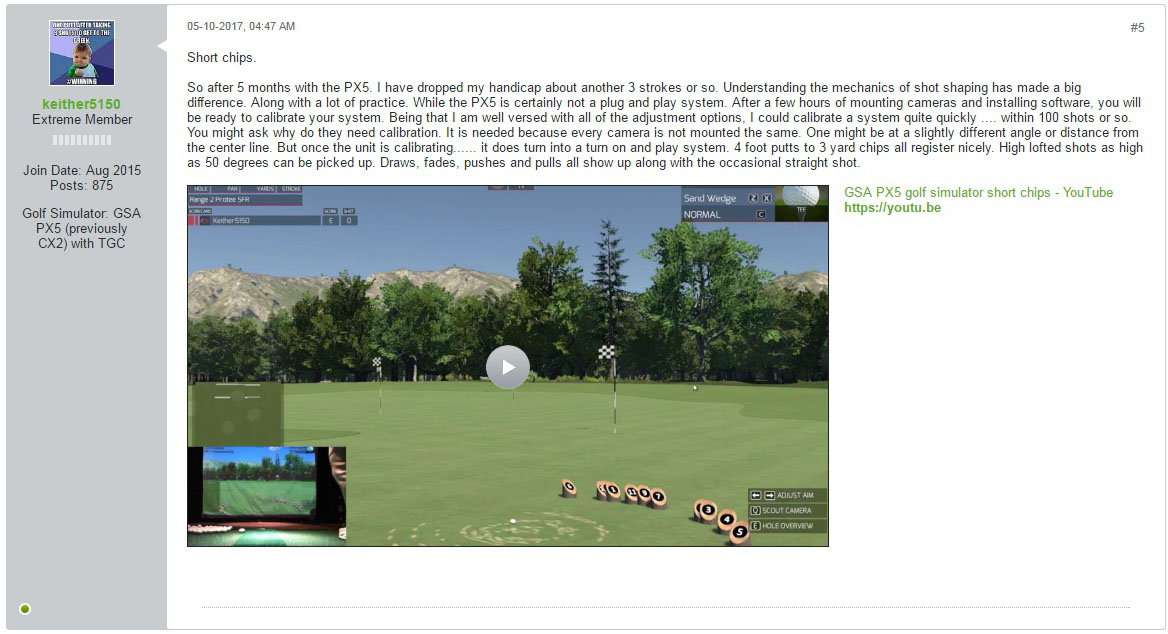 I decided to start with little brook manor as you suggested. I know it well since it is one of the R-Motion courses. -I get consistently good traces on full swings as well as putting.

-Putting seemed pretty good! I am no expert and I am out of practice but I felt pretty confident with the distances. -Short chips are a problem with spin. I

like to play bump and runs and the ball would carry the proper distance but instead of running they would backspin. I turned down chipping within 17yards down to 3000 from 5000.

I may turn it down more. -Most full swing shots I would say were great! Fat shots were short and pure shots went what I would say is my norm. I had a few baffling shots. I hit my 5 iron in the 170-180 range

I checked the cameras and both traces picked up properly. (I should have taken screen shots) -I believe I corrected my wedge issue with the clubhead getting into the FOV.

I am positioning the ball just in front of the rear line sensor which moved me back just enough. I am a little concerned how this may effect club face and direction if it may move the ball left or right.

I figured out a way to get a proper LA with my set up. I shifted the image up so that I can move my launch position back.

I also added a 12x12 fiberbuilt fairway piece ahead of my hitting area. I chip from there and find that the ball flight and carry is pretty accurate on slow chips.

Because I moved the launch position back, full shots are within ½ degree of the raw angle shots. So, good news!!!!! You don’t have to add anything to the control panel.

Flop shots have to be taken from further back as the club head sometimes comes into play. I think that I have everything working as well as my X,Y system.

Martin, Yesterday I was having trouble with IBS when it switched to putting. The screen filled with white specs. Today I tried it with the putting camera gain turned all the way down to zero. Problem solved. I suppose that this is the case due to the difference in shutter speed. I did a computer reboot and found that I didn’t have any no reads during the 13 holes that I played today. Maybe suggest that a reboot might be helpful after a CP update. IBS was turned on and it works great. I will be switching out to a full putting green shortly and I am hoping that I won’t have any issues. I have tested the LS cam with pieces of my stance mat from FB. I can adjusted it the it works fine. Chipping and putting was working great. Off the tee, I thought that the ball flight was too straight…. Maybe too forgiving. So I set up for a big draw. I managed to get 27 degrees of right SA……so my system can pick up mishits for sure. Then I set up for a fade but with less SS. The ball started right about 2 degrees and had left SA of 9.7 degrees. So the ball started right and faded back to the left nicely. I am really happy with the new stereo set up. It seems like Kevin is dialing in his settings as well. And the best part…. There is nothing for you to fix at this time.

Hey Martin and Keith, I just wanted to say thanks and I am in love!!! I believe I have made almost all of my adjustments and the PX5 is awesome! Keith kept telling me to use IBS and I finally switched over tonight.... WOW! The images and reads are great. Attached is two 6 iron pics to show my IBS images. I played a full round tonight. No reads were at a minimum. I had one putt, one tee shot (which I launched from CP), but then I did have to close TGC and GSA and reopen when I was trying to take a half wedge shot that wasn't reading after multiple attempts. After the restart I believe I had one more no read. Keith- I started Q school tonight. My TGC username is Swiggs. It looks like you check on some of the scoring so I wanted to let you know I had one rewind near the very beginning. I hit my hybrid (on 5 wood setting) and it travelled 45 yards too far. I went into the CP and noticed spin was at 7000 and speed was 117%. I brought down to 100% and 3000ish spin and used the CP to relaunch after. ( I don't want to be the new guy who cheats and still gets last place! ha!)